We spent three nights in Istanbul where Mac put his negotiation skills to use in the Grand Bazaar He relentlessly wore down the best of the vendors and made the most of his spending money. The Grand Bazaar is a very old (opened in 1455) and massive covered market which still thrives today.  It spans 61 streets and has over 3,000 shops/booths.  The haggling that goes on is unbelievable. But they met their match in Mac!


Then the animal adventures continued when Mac, Levi, and Wiley befriended dozens of Istanbul's street cats near our hotel.  There are many "stray" cats and dogs living in Istanbul.  I hesitate to call them strays because the people of Istanbul take care of them, putting out food and water for them.  The authorities make an effort to vaccinate and spay/neuter many of them. 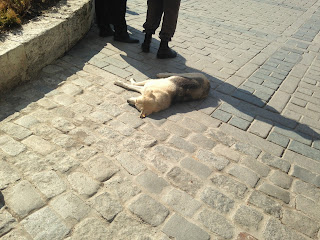 The tag in this dog's ear indicates that he has been vaccinated.


We enjoyed our visits to Topkopi Palace, former residence of Sultans and their harems, the Blue Mosque, and Hagia Sophia, all of which are spectacular.  The call to prayer, broadcast by loudspeaker   from both Hagia Sofia and Blue Mosque can be heard all over the city 5 times each day.  To those of us not used to hearing this, it gives the city a mysterious aura....the locals on the other hand seem to just carry on with whatever they are doing. 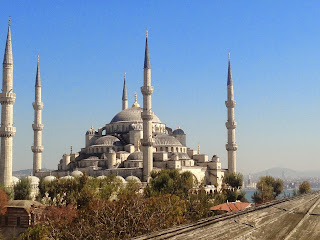 The Blue Mosque
Of course no visit to Istanbul would be complete without a trip to the Turkish baths!  These baths have been in operation for hundreds of years.  I don't think the kids have been so clean in their whole lives! 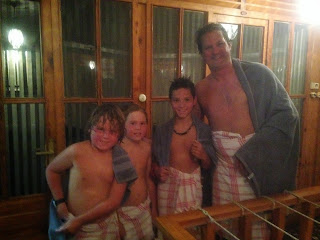 
Posted by LastingerTravelBlog at 12:34 PM