We had a fantastic time in London.  We crammed in most of the tourist spots: the Natural History Museum, the Tower of London, Buckingham Palace, etc.  We also got to see the Stones again when they played in Hyde Park on Saturday night and as an extra bonus we got to see friends Sheldon and Katie Clark who were visiting London.  We also enjoyed meeting their cousins Charlie and Catchi.

For my tennis buddies....We arrived in London the day of the Wimbledon semi-finals.  It was simply not possible to get tickets for the final match without completely blowing our budget for this trip!  We considered trying to get on the "hill to watch"  but ultimately opted to join some locals at a nearby pub which turned out to be a lot of fun. 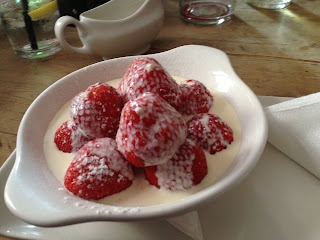 Lane ordered this in honor of Andy Murray's victory

We considered staying an extra night in London but decided it was time to move on.  We've also decided it's time to take a break from moving around so much.  We've rented a place in the Hautes-Alpes region of France for a week beginning on the 12th.  So for the four days in between we decided to head to the cote d'azur and have rented a place in Antibes, Juan Les Pins for a few days.  We left London Monday night on the Eurostar to Paris hoping to get on the night train to Antibes.
Of course the night train was full....we should have known better.  But ...the upside was that we spent the night in Paris.  We walked into a free night of concerts in Place de La Republic as we exited the metro! 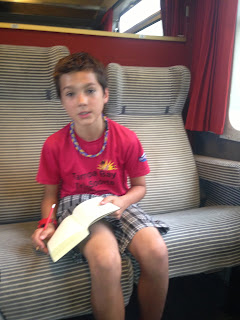 Posted by LastingerTravelBlog at 3:07 PM