As you can tell from the kids' posts, we have been traveling in Spain and Gibraltar.  Our friends, Maripe and Jaime, from Madrid, loaned us their car! Yes, they are wonderful, generous and very trusting!  We spent a night in Granada, home to the famous Alhambra and then a night in Sevilla which is  beautiful riverfront city.  We enjoyed both immensely.  We love Spain, for many reasons....but one particularly nice thing is that we can eat really good food here for not a lot of money.  (this is important when feeding three growing boys)   And luckily, they are usually willing to try pretty much anything.

From Sevilla we decided to go to Gibraltar in spite of the warnings about the long lines and difficulties  to get through customs.  In the early 1700's the Spanish ceded Gibraltar  to Britain in perpetuity....they've been bickering about it ever since and most recently tensions have flared over Britain's proposed development of an artificial reef.  So apparently the Spanish have been making it very difficult to get through customs.  I guess we were very lucky because both coming and going there was no more than a few minutes wait.

Mom's note to Mac's Gibraltar Monkey blog:  The monkeys are Barbary Macaques. Although they are certainly accustomed to people walking around, they are in fact wild monkeys.  There are signs everywhere on the rock that say things like.... "Don't pet the monkeys", "Don't tease the monkeys", "500 euro fine if you're caught feeding a monkey", "Danger monkeys may bite."...i.e.Don't make the Monkeys mad.   Mac was not breaking any of these rules.  He just squatted down to take a picture of one of them and the next thing Mac knew another one took a liking to him!....fortunately this monkey didn't get mad about anything!

Gibraltar is only about 9 miles from Morocco on the the northern coast of Africa.  There are ferry crossings from nearby Tarifa to Tangier about every hour.  This was just too tempting to pass up.  So after we got the monkey off Mac's back :) we hightailed it down the rock and made our way to Tarifa just in time for the 4:00 ferry.  We spent the afternoon exploring Tangier and had a feast of fish(we're not sure what kind), shrimp, squid and a variety of meat skewers.  We tried to find a hotel so we could spend the night but everything was booked.  So unfortunately we had to take the last ferry of the night back to Spain but we enjoyed our afternoon exploring the city.  Here are some photos of our day in Morocco: 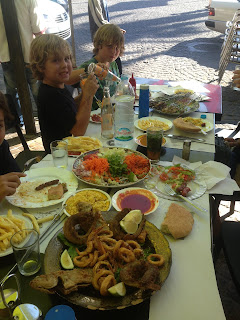 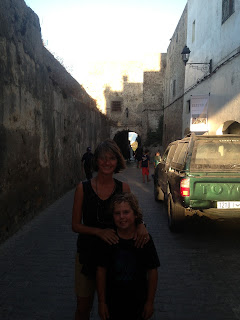 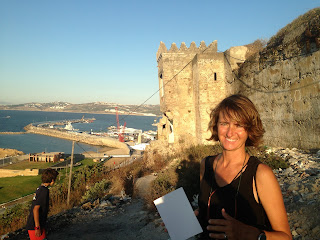 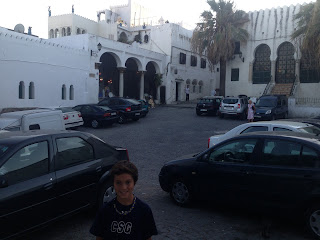 Posted by LastingerTravelBlog at 3:01 PM