Sadly, it was time to leave Africa day before yesterday.  We're now back in the northern hemisphere, in Dubai, UAE.   Africa was full of experiences that we will never forget.  I've pretty much left the blogging up to the kids lately but thought I would add some reflections on our stay in Africa.

Egypt:
We thought seriously about cancelling our plans to go to Egypt because of the recent political unrest there.  But in the end we decided to go and we are SO glad we did.  We felt very safe there.  We arranged the trip with a tour company and they treated us like royalty all week.  We stayed in fabulous hotels both in Cairo and Luxor.  Egypt's tourism industry has been crippled by the recent protests.  Our hotel in Luxor had 400 rooms and there were only about 40 people staying there.
The captain of the little felluca we went on said we were his first customers in a month.  Egypt depends so much on tourism that its drastic decline has had devastating effects for the people there.   Wiley did a blog about Felix the donkey at the animal care center near Luxor.  The animals there exemplify the ripple effect the recent upheaval has had.  The animals are not there because they were mistreated.  They are there because their owners can no longer feed both their animals and themselves and their families yet they need the animals for what little work they have.  So it turns into a vicious circle...they keep working the animals to earn money but they can't earn enough to feed both so of course they feed themselves first and the animals end up malnourished.

Of course we benefitted from this sad state of affairs!  We got to see Egypt at rock bottom prices and in high style!  We even got a free upgrade to a flight between Cairo and Luxor instead of having to take the 12 hour train ride!  Our first day in Cairo we actually ended up with our own bodyguard!  In most foreign countries when you check into a hotel they take down your passport information and pass it on to the authorities.  In most places this is a formality....in Cairo it means the "tourist police" show up and insist that their armed guard in a black suit accompany you (because you're american) on your day of sightseeing.  Of course they then bill your tour company....clearly this is just a way to make money because we certainly never felt like we needed a bodyguard.  He turned out to be an ok guy...I caught him smiling when we were all trying to get on our camels!

We spent most of our time in Tanzania on safari.  There are rules about safaris....don't get out of the vehicle; don't walk around at night, in fact don't even venture out of your tent at night.  If you absolutely have to go to bathroom in the middle of the night shine a light outside first then only go just outside the tent, lest you get eaten by one of the various carnivores lurking in the bushes!  Now these rules were drilled into our heads from day one.  So, late one afternoon(not long before sunset), after we had been bumping along(dirt road) for hours through the Serengeti on our way to that night's camping spot, the wheel of the trailer carrying all of our supplies flew off.  By wheel, I mean the entire thing...tire, lug nuts, everything.  The kids saw all of this happening out of the window and immediately shouted "Mom the wheel came off!"  The rest of us looked in time to see it rolling along and hit an embankment which did nothing but give it momentum and we all stared as it bounced a good two or three hundred feet into the Serengeti Bush...you know, The Bush, where the lions, leopards, black mambas and any number of other creatures live...waiting for a nice dinner to come along.
Then we all started laughing hysterically, even Malles our guide was laughing. (Later Wiley analyzed our laughter by saying "Mom, I don't know why that was so funny but it was just funny!")  When we finally pulled ourselves together we stood in silence, staring into The Bush, knowing that one of us would have to venture in to retrieve the tire,... breaking all the safari rules.  As we were  contemplating this to ourselves, another safari vehicle pulled up behind us and out jumped a group of very friendly Brazilians who offered assistance in the form of ice cold beer. I should mention that our vehicle's cooler didn't seem to work and only contained lukewarm water...perhaps you get what you pay for.  But back to the issue at hand, Gideon the cook,summoned his courage and volunteered to retrieve the wheel. So we and our new Brazilian pals watched him march off ....and I'm sure lots of other eyes were watching him too!  Luckily Gideon  found the tire and made it back. Unfortunately they couldn't get the wheel fixed. So we tied all of our gear to the top of the truck and left the trailer behind.
Later that night as Lane and I walked  from the washroom to our tent we heard a distinct low growl. The next morning we learned that it was indeed the growl of a leopard....as we were discussing this a baboon strolled into the campground and stole our breakfast toast. 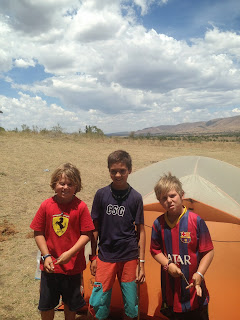 Speaking of baboons.... Levi did a blog about hunting with the Hadzabe tribe near Lake Eyasi.  This was an amazing experience.  The Hadzabe  are the last hunter-gatherer tribe in Tanzania and one of only a few left in the whole world.  They speak in a clicking language.  They make their own bows and arrows.  They eat every bit of what they kill and they eat it fast!  They cook it just long enough to burn the fur off and eat it it all including crushing the hands and eating those too, bones and all.  They were ecstatic about killing the baboons, it meant that they would eat substantially that day and it is their favorite food.  They shared a slice of baboon liver with us.  This  is now the standard by which we compare all food...."how's your dinner?" " Well, it's better than baboon liver."

We also spent time with the Maasai tribe.  We hiked over 12 miles across the the Highland to reach the Bulati school, a primary school for the Maasai children.  It's in the middle of nowhere.  The school officials allow travelers to camp next to the school.  We were the only ones there though.  They charge a small fee which helps the school.  The Maasai have more contact with the rest of society than the Hadzabe.  They are an agricultural tribe, raising cattle and goats and growing grain and vegetables.  They live in villages comprised of huts made with mud and cow dung.
They are in great physical condition because they walk so much and they are long lived,  heart disease is non existent among the Maasai who continue to live in the traditional culture.

Our boys were able to spend a couple of days interacting with the children.  The Maasai kids were fascinated by Mac, Levi and Wiley.  Mac made an  observation about the Maasai and the Hadzabe:  He said they are very happy people even though they live in mud huts because they are so free.  And he is right. 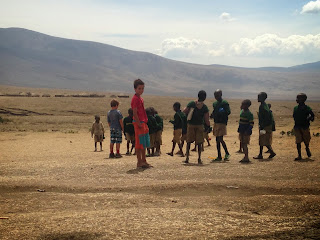 Wow what an absolutely beautiful place!  We really loved it in Cape Town.  We rented a nice little house near Kalk Bay where we could enjoy the mountains and the ocean.  The kids especially enjoyed surfing at Surfer's Corner in Muizenburg.  The effects of apartheid are still prevalent though.  It's shocking to see the massive shanty towns all around  this beautiful city. 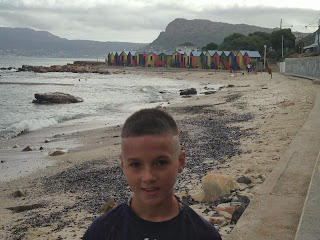 Posted by LastingerTravelBlog at 7:11 PM