Before we got into Cape Town my Dad really wanted to go on a Great White shark tour where you go out on a giant boat with a big metal cage.  You drop the metal cage in the water and it has floating buoys around it so the cage floats a little above the water so you can go up to the surface and breathe.  When my Dad said this I decided I really wanted to go too and Mom and Dad said I could go.  The next day after we got to Cape Town we woke up at 7 in the morning.  The drive to get to shark tour was two hours long but it was a very pretty drive so we enjoyed it.  When we got there I was surprised at how many people were there, there were about 20 people there!  When I walked into the building there was coffee and tea and a nice breakfast waiting for us.  I raced over to get as many chocolate cookies as I could!
After we ate they played a video of all the rules then we headed to the boat.  It was gigantic.  The ride was very short to get out to the spot where we wanted to go.  They told us this was their winter spot.  While we were at the winter spot we did not see any sharks so we moved to a different spot.  We saw other boats there that had sharks by them.  I really liked the drive to the next area because along the way we saw many whales and seals.  At the second spot we waited about 30 minutes.  Our chum master mixed up dead fish in a big bucket with a shovel and other people had giant tuna heads tied to a big piece of rope.  They would throw it out to sea hoping a shark would come to get it.  After a while the first shark came.  It was humongous!!  It was the biggest shark I've ever seen.  It was Great White over 10 feet long.  After we saw the shark they called over about 7 people to get wetsuits, goggles and weight belts.  After we got all this on we hopped into the cage.  The guy threw out the giant tuna head then yank it back toward the cage to get the shark closer.

Here are some pictures and a video: 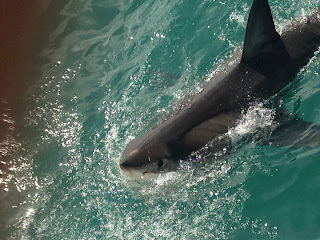 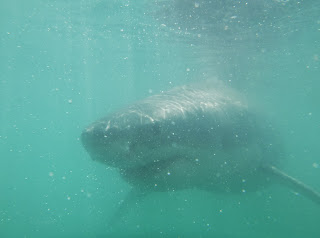 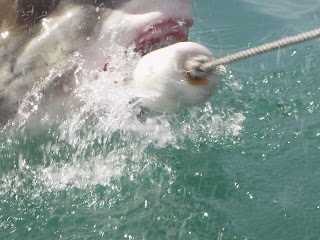 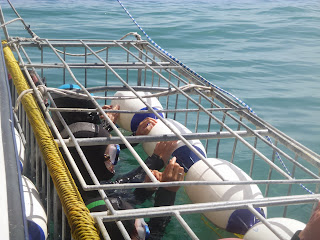 My Dad and I had a great time swimming with the sharks.  If you ever go to Cape Town I recommend that you do it too!
Posted by LastingerTravelBlog at 12:23 AM